Bringing back my data

The past days have been very “FLOSS” for me.

Let’s start from the beginning: Tuesday I managed (= it means I found money) to became a supporter of the FSFE! This is something that I had in mind since the last Linux Day (I’m sorry, that post is in Italian!) because I meet the FSFE Bari guys there and we had a nice chat.

I already knew the FreeYourAndroid campaign, but on Thursday I stumbled upon Nikon Roussos’ post and he really motivated me to start replacing closed app with FLOSS app on my phone.

Thanks to F-Droid, after some hour I realized there’s a good FLOSS alternative for almost every application I use. Notably, I switched from Navigator to OsmAnd~, from Google Keep to Mirakel, from Google Translator to QuickDic, from Google Hangout (SMS) to TextSecure, from Twitter to Twidere.

The list was not so short as I thought initially and this scared me because there were too many Google apps. Yes, that’s because it has the best services out there, but this means it had my location, my SMSs, my todos, my translations, my mails, my contacts, my events,… even my website stats! - I bet Google knows me better than I do. 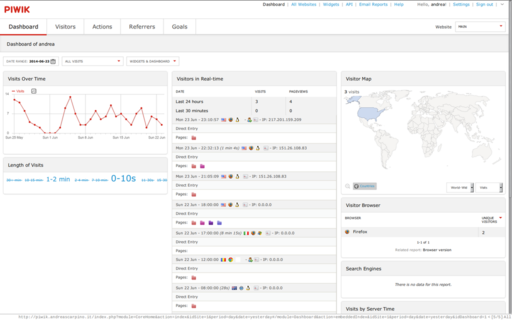 Tuesday. It was time to remove the Dropbox client and switch to ownCloud. I never really used Dropbox to store my private files, I just did install the client because others co-workers did and we needed a quick way to work on a folder at the same time. Luckily I don’t have to share a folder with co-workers anymore, and even if I had I would use the website instead - Yep, downloading and uploading the file every time.

I used this day to remove that package from my system and setup an ownCloud server that I’m using for remote backups. Now I can put my private files on the cloud because I trust the service this time :-)

Only GMail and Google+ left and then I free-ed my Android.

Google+ is harder. I don’t want to quit Google+ because of the FLOSS development around it. It’s a great place where to look for FLOSS news, look for people reactions and even people issues. It’s a real pity Pump.IO or even Diaspora aren’t at the same level. However, I always publish my staff as ‘Public’ audience, so Google doesn’t really own anything.

On the contrary, GMail is a bit easier because I already use my aliases everywhere so I just need to open a Kolab account and update my forwarding rules. However we’re all Gmail users now.

Let me say that I don’t want to quit every closed service and use my own instance (it would be cool, but you know it isn’t realistic), instead I guess we should look for a FLOSS alternative first and in the case there’s none we could split our data between many companies…and start making the FLOSS implementation!

Oh I almost forgot, keep an eye upon the Tox Project! It’s the free alternative to Skype/Hangout.